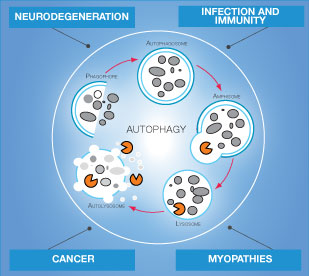 Autophagy is a cellular degradation process that involves the delivery of cytoplasmic cargo to the lysosome. Autophagy occurs at low basal levels in all cells to maintain homeostatic functions such as protein and organelle turnover. It is rapidly upregulated when cells need to generate intracellular nutrients and energy during starvation, growth factor withdrawal, or high bioenergetic demands. Autophagy is also important process to dispose of damaging cytoplasmic components during oxidative stress, infection or protein aggregate accumulation. Consequently, impairment in autophagy can lead to development of certain pathological conditions1,2.

It is well established today that organization of misfolded proteins in aberrant structures such as oligomers initiates profound cellular dysfunction and eventually can result in development of neurodegenerative diseases. Alzheimer’s and Parkinson’s diseases exemplify the contribution of aggregate-prone proteins to disease pathophysiology3.

Eukaryotic cells coordinate protein-folding reactions both in the cytosol and in the ER. Differential protein synthesis rates and protein folding accuracy are part of separate signal transduction pathways triggered by the ‘unfolded protein response’ (UPR) in the ER. A subset of soluble molecular chaperones modulates protein folding in the cytosol. Misfolded proteins can be retained associated with molecular chaperones within the ER lumen or translocated to the cytosol for ER-associated degradation (ERAD) through the 26S proteasome or through autophagy. Autophagy is activated in response to this blockage of the proteasome by the pathogenic proteins. However, overloading of the autophagic system can occur and lead to cell death. Autophagic degradation is utilized to reduce ER stress resulting from protein misfolding cluttering.

The discovered activation of autophagy in response to ER stress and cytosolic accumulation of protein aggregates in brain raises implications for understanding and tackling neurodegenerative protein misfolding diseases4. Effects of autophagy on aggregate-prone proteins in other tissues may result in other medical conditions such as myopathy.

Moreover, autophagy plays a role in cancer development: it acts as a tumor suppressor by removing damaged organelles and reducing genome instability, while in other conditions this process helps cancer cells to survive under low nutrient conditions or in cancer treatment.

Innate and adaptive immunity are also dependent on autophagy process. Bacteria, viruses and protozoans are generally removed from host cells by autophagy mechanism. Autophagy also may help to prevent inflammation and autoimmune diseases.